Before I really begin this piece, I just want to write about how insane my traffic has been in 2016.

Now to put this in really big perspective, I’ll tell you this.

I started this website with two real goals in mind and I achieved them both in February of 2015. I hit my first 100,000 views and I started to make money from the blog. After I achieved these things, I felt like I was done. I felt like I had done what I set out to do, but I told myself, I might as well keep going.

And then I hit 400,000 views in December of 2015 and I started to realize what I had built. Because for the longest time, It felt like I was sleeping, but suddenly I woke up and saw that all of my handwork was actually going towards something. I realized that after 400,000 views, I would be hitting 500,000 views. I would be hitting half a million views! This really woke me up.

And I really would have stopped at 100,000 views, but I just felt like I should keep going and thank god for that. And when 2016 started, I didn’t know what to expect. I was nervous. 2015 was so good, I didn’t want it to end. I had finished the year with more traffic than I imagined and hit 400,000 views to end of the year, but then 2016 happened and nothing has been the same since. 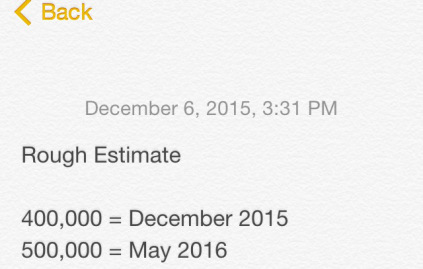 I ended up hitting 500,000 views in February. 3 months earlier than I expected.

And let’s put it this way.

Again showing how incredible 2016 has been. I truly never imagined in my wildest dreams that I would have generated all of this the way it has happened, but I’m proud. All of my hard work is going somewhere. It’s amounting to something. Maybe quicker than I imagined, but I’ll take it.

And now I’ve generated 700,000 views in 647 days. It’s insane that I’m writing this because 45 days ago I was writing about hitting 600,000 views. All of this was not in my rough estimate. In the first estimate I showed you, I only gave you 2 predictions, but this photo below has more. And considering what has actually happened, things are insane.

And this is what actually happened.

The only prediction that was true was for 400,000 views, but that wasn’t really a far-fetched thing. It was late November of 2015 and I was really close to that number, so I put December of 2015.

All in all, 2016 has been wild. I don’t really know what to say, It’s just insane, but here’s the part where I show you all of my countries and where I get the majority of my traffic from.

Now I may be shocked at all of this success, but I do know one thing and it’s that if you continually work hard, good things will happen. And I have been working hard. I’ve essentially been blogging non-stop since I started this site in late July of 2014. I haven’t really taken breaks.

Now with that all being said, next stop 800k views. And thank you for the click, no words can really say how much I appreciate it.