The 2015 Copa America kicks off tomorrow. The Host Chile and Ecuador will kick off the tournament with the first game tomorrow. With that being said, here are my predictions on how this tournament will unfold.

Prediction : Chile will top the group with Mexico finishing second.

Reason : Ecuador has only won one game this year and they lost to Mexico 1-0 in a friendly two months ago. Mexico is in their group. On the other hand, Bolivia just recently lost 5-0 to Argentina. And that was Bolivia’s first game of the year. They are not entering this tournament on any type of high note. I expect this group to be a battle between Chile and Mexico, with Chile edging them to finish first.

Prediction : Argentina will top the group with Uruguay finishing second.

Reason : Even without Luis Suarez, Uruguay will still finish second. Argentina have too much fire power not to finish 1st in this group. Paraguay and Jamaica won’t stand much of a chance against these teams.

Prediction : Brazil will top the group with Colombia finishing second.

Reason : Since Brazil lost in the World Cup, they are 9-0 with Dunga as their coach again. Neymar is healthy and will be coming back from winning the Champions League with Barcelona. Colombia is coming off a great World Cup campaign and Brazil vs Colombia will be a great rematch of the 2014 World Cup quarter-final. Peru and Venezuela have good squads, but don’t stand a chance in making a dent. 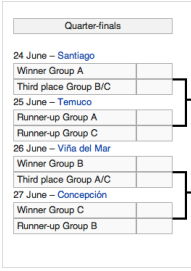 Reason : As the Host, Chile will be too much for Paraguay.

Reason : This could go either way, but I see Colombia edging Mexico because most of Mexico’s players will be involved in the 2015 Gold Cup.

Reason : Brazil will play Uruguay in a close contested game, but Brazil will edge this one out.

Reason : The host will gives the fans what they want and they will see their team go to the finals. I can see Chile winning this game in extra time or shootout.

Reason : This game can go either way honestly, but I think Brazil will win this game because they want to erase their demons from the World Cup last year.

Reason : Messi will want to at least finish 3rd for Argentina. That will be the difference.

Reason : Since losing in the 2014 World Cup, Brazil has gone on to win 9 games in a row. In these 9 games. Brazil has beaten Colombia, Ecuador, Chile, Argentina and Mexico. All of these teams will be playing in the Copa America. Brazil will erase all memory of the World Cup by beating the host Chile.

There you have it, that’s my entire prediction of the 2015 Copa America. The tournament begins tomorrow!