Where do, I even begin to explain this? Nothing comes to mind. I’m speechless. I’m literally, utterly and honestly speechless. How have, I generated 200,000 views in less than a year alone? It is persistence? It is luck? Is it being smart? It is all of the above? I really don’t know. Way back in July, I thought I would hit 100,000 views by July 30 2015. After generating so much views and passing so many milestones faster then I expected, I had to re-predict where, I would hit 100,000 views. This is what, I told myself in January. 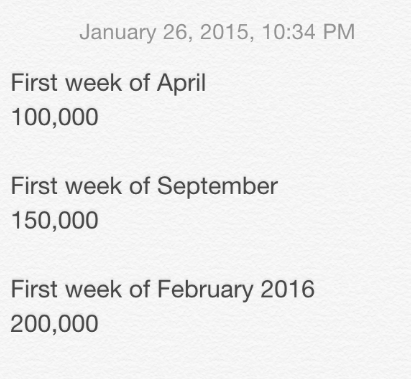 I’m completely obsessed with this website. I don’t say this to anybody, but I really am. I think about this website everyday of every second. It was never supposed to become something, but it has.

It’s not even a website to me anymore, it’s apart of me. But there’s something you need to understand. I think constantly of new ideas every single day of every single minute. You might even be around me and I’ll be thinking of an idea. When, I’m on the subway, I find inspiration and ideas when I look and see people. I watch countless upon countless interviews online of the people who inspire me. From Michael Jackson to Drake to Kanye West to Tupac. I’m studying the people who inspire me every single day. I don’t ever write or talk about this, but I do.

I’m so dedicated to my craft that, I scare myself. I will legitimately be sleeping at night, thinking of new ideas and when an idea hits me, I’ll wake up, grab my iPhone and write down the idea.

This note from my iPhone that just say’s recognize post, two days later become my Life Talk #10. Everyone wants to be recognized. I was literally so tired that, i didn’t write down the whole concept, I just wrote recognized post. When, I take a shower as well, I’m constantly running through which posts, I should write next or how can I write better. These are the things nobody see. You just see the completed post and you read it and I love you for that.

And then, I see people commenting on my posts and saying how they liked it and I think to myself, it is worth it. I told myself from the very beginning that if, I want to connect with people in my writing then my writing has to be completely honest. And, i’ve kept that promise to myself.

The honesty, I was referring to in the N64 post, I did back in July was one of the games, I played a lot of was when, I was in Sick Kids. I have a heart condition. I don’t really like talking about that, but I did because honesty in writing like, I said is important.

I remember when, I hit 100,000 views in February. I was terrified. I was excited, but I was more terrified than excited. Then, I nearly fainted when, I found out, I was getting accepted into the wordads program aka advertisements on your website to generate money. Why was I terrified? Because, I had achieved the two goals that, I set out to achieve back in July. You know that feeling when something finally works out and it’s amazing, but your like now what? That’s what, I was terrified about. I still am.

3 months after reaching 100,000 views, I’ve officially been paid from my website. 3 months later, I’ve reached 200,000 views. Being completely honest, all of this still hasn’t set in for me. I’ll type the fact that, I just reached 200,000 views, but I don’t even, i don’t feel it. People tell me like, wow 100,000 views! Wow 200,000 views! And, i’ll be like, I know right! Maybe, it’s because, I’m never satisfied. I really am not satisfied. I want more. I want to write more. I want to connect with more people. I look at somebody like Jay Z or Lil Wayne, these people made millions of dollars and they still continue to make music. I’m inspired by that.

I motivate myself everyday. That’s why, I’ve been as successful as, I’ve been. I don’t feel like, I’m successful, but I do know that i’ve been successful so far. I don’t know if that makes sense, but it makes sense to me. I just want people to read my writing and to be inspired. I want people to do what they love to do like, i do what I love. I’m never going to be the guy whose like yo, I have over 200,000 views, I’m so cool. I can’t be that guy because, i’m not even satisfied. I don’t think, I’m successful. I don’t know, i’m weird. Just thank you for reading my stuff. Thank you. Thank you. Thank you. The motto that, I always post comes from the movie Nightcrawler. I saw the trailer for the movie, a few days before, I made my website. That quote inspires me every time, I read it. That’s why, It’s always there.

You always need to be your number one motivator. Next stop 300k views. I don’t know why, I always talk about an end, this will never end. I’m weird. And, i’m typing/talking to myself. Thank you again. That’s all!