Disclaimer : I’m not a fan of Iggy Azalea, Though, I do think Fancy is dope record, but that’s because of Charlie XCX. I’m a fan of her.

I’ve watched the Azealia Banks interview with Hot 97 and I watched the Macklemore interview with Hot 97. Time and time again, people are still not understanding the real issue here. My issue and why, I’m writing this is because although, my website is getting big, it isn’t at the level where my platform reaches millions. Hot 97 reaches millions of people and they still are not getting it. I’m going to discuss in this post, how I view what these two artist have said and my opinion on this topic.

“That Iggy Azalea shit isn’t better than any fucking black girl that’s rapping today, you know?” Banks said. “When they give those awards out — because the Grammys are supposed to be accolades of artistic excellence, you know what I mean? Iggy Azalea is not excellent. […] When they give these Grammys out, all it says to white kids is: ‘Oh yeah, you’re great, you’re amazing, you can do whatever you put your mind to.’ And it says to black kids: ‘You don’t have shit. You don’t own shit, not even the shit you created for yourself,’ and it makes me upset.”

I feel, just like in this country, whenever it comes to our things, like black issues or black politics or black music or whatever, there’s always this undercurrent of like a, ‘Fuck you,’’’

Here’s an important thing Macklemore said in his interview

Let’s be serious about life for just a minute here. Iggy Azalea is just a scapegoat in all of this and that is honestly the truth and that’s not even debatable. Well, of course it’s debatable, but not really. Now how, I see it,  Iggy is just a by-product of the society we live in. She is rapping and making music and she is making money off of it.

You know what changed that? Money. Michael Jackson’s talent was so undeniable that MTV had to play his videos. You think they played his videos because of the talent though, not a chance in hell. Michael Jackson had the talent and was not being played on MTV, but all the money that Michael was bringing in with his album Thriller, MTV knew they had to play the videos.

Michael even felt he was snubbed in the Grammy’s for Off The Wall, what did he do? He said it could never happen again referring to him not winning record of the year and he went on and created Thriller, which led to breaking down racial barriers in music.

Now nearly six years after his death, what has the world learned from him? What has the majority of Hip-Hop fans learned from him? Absolutely nothing. Azealia Banks is now talking about people reading all of her tweets and choosing the things she says so they can make people click their websites for money.

Are you serious about life? This isn’t new. She shouldn’t be praised for saying that, that is basically common sense. Criticizing the media isn’t new. Michael Jackson already explained that type of situation in his song Tabloid Junkie.

Azealia Banks talking about their being an under current of Fuck You, umm has she listened to Michael Jackson’s They Don’t Really Care About Us?

When Azealia Banks talks about capitalism, has she has ever heard Kanye West’s New Slaves? 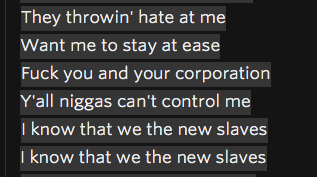 Does she not understand the lyric in Tupac’s Changes?

Personally, I’m not a fan of people saying things other people say and they get credit for it. Azealia Banks isn’t smart or intelligent or somebody who knows what is going on. She is just saying what people have been saying for decades. She’s educated, i’ll give her that, but she isn’t special. J Cole for example, which, I wrote about with him talking about capitalism and his verse on history repeating himself, he isn’t smart or intelligent because he is saying these things. He’s educated, like  Azealia Banks, but he isn’t special. LIke damn man, Kanye West literally said all of this in 2013 and everyone turned a blind eye.

Back to which, how talking about all of this is supposed to help her is beyond me. Maybe she is doing this all for attention, but I can’t believe she is that stupid to be doing that. She needs to understand that Iggy isn’t her problem, its with the corporations. Until she comes to real terms with that, she’s a lost cause.

Back to which, this isn’t about colour, it isn’t about Iggy appropriating black culture, it’s about money. It’s about hip-hop being mainstream and it being a business. Now, my thoughts on the comments Macklemore made, i feel like he is just appeasing people by saying what he is saying. Saying Kendrick Lamar’s album was better than his, but, I have to stop my writing on that because I don’t understand why he is only talking about Kendrick Lamar.

In my opinion, Drake’s album is better than his album. Drake should have won the Grammy, that isn’t even Toronto bias from me or maybe it is, but still Nothing Was The Same was the best album. This is my opinion, remember that. So why did he only point out Kendrick’s album?

You want to know my take on why he did? He is just trying to appease people. The majority of people wanted Kendrick to win, so what did Macklemore do? He only pointed out Kendrick Lamar. The majority of people think Iggy is just trying to appropriate black culture, so what does Macklemore say? “This is not my culture to being with.” Macklemore basically says everything you want to hear if you love hip-hop and your black. Now even though, I already discussed this in the Grammys post, did, I’ll say it again.

The Grammy’s in its own criteria does not hand out Grammy’s solely based on how good an album is. It’s mostly based on prominence and you can read more about that here. Azealia Banks is talking about the Grammy’s, yet she has absolutely no clue how the Grammy’s actually works in the context of which she describes it, but since she has fans, they just listen and believe whatever she is saying as true. A really good quote about that way of thinking is The Truth Is What The Majority Thinks.

Everything that is needs to be read or listened to about the hip-hop/culture race debate can be seen in what Kanye was saying 2013 in all of his interviews. He knows that money makes the difference and understands society, but what does the media do, call everything he is saying rants. Again, the truth is what the majority thinks and a lot of people think he is just ranting when he speaks, but if you just listen to him, you’ll see differently.

Iggy Azalea is everything you can be against in this world right now if your black. She’s white, she’s prospering, she has a platform where she can be talking about politics, but she isn’t. She’s rapping and making a lot of money off it and she’s winning. She’s simply winning. If you don’t like her music, then don’t listen to her.

If you think she is trash, remember that’s just an opinion and not fact because Iggy got fans. She’s good. She doesn’t care about you. What I don’t get it is, Nicki Minaj went pop and Peter Rosenberg of Hot 97 criticized her of going Pop because she is a rapper. Yet, Iggy Azalea can be white and go out and rap and she gets ripped apart.

That is a clear double standard. And hey, maybe Iggy knows how society works and is rapping and getting money because she’s white. Maybe she sees the privilege and is working the system to her advantage. Who are we as humans to judge that? But… But… But.. she’s taking our stuff and making money off it. It… It .. isn’t real. So basically, this comes down the losing the integrity of what hip-hop is and money.

For a little second here, let’s just ‘fancy’ the idea that she is taking black culture and prospering from that. Again, I can cite Michael Jackson as another excellent example. Here is a quote from Michael Jackson from his Ebony Magazine interview in 2007. I used this example in one of my other posts.

“Ever since I was a little boy, I would study composition. And it was Tchaikovsky that influenced me the most. If you take an album like Nutcracker Suite, every song is a killer, every one. So I said to myself, “Why can´t their be a pop album where every…”—people used to do an album where you´d get one good song, and the rest were like B-sides. They´d call them “album songs”— and I would say to myself, “Why can´t every one be like a hit song? Why can´t every song be so great that people would want to buy it if you could release it as a single?” So I always tried to strive for that. That was my purpose for the next album. That was the whole idea. I wanted to just put any one out that we wanted. I worked hard for it.”

Michael Jackson major influence came from a white person and he used what he learned into his music. Iggy Azalea cites Tupac and Missy Elliot among other artists as people who inspire her, yet she gets like, I said ripped apart in the media by hip-hop fans. Now just for quick clarification, I’m using Michael as a parallel for Iggy, but I am no way comparing the two artists.

Michael is above ever single artist and I’ve wrote about that. I’m just saying, were born into the colour of our skin and it isn’t fair that we should abide by our skin colour when it comes to music. I don’t care if you are an old head and you think you understand culture and you think you have the keys to culture.

Any human being in this world can be a rapper and not have to abide by rules within rap culture. You can find the origin of rap music from black people, you can find the origin of Jazz from black people, but the origin of composing music is with white people. If Michael can take what he learned from composition, then Iggy can take from what she learns from hip-hop and put it in her music. Art shouldn’t have restrictions and for people to say well, this isn’t hip-hop or this isn’t real, well that’s on you.

It really is that simple. The moment you label music a certain colour, that’s when races separate and that’s just pure negativity. Music is art and art is shared among all. Every colour struggles, people really have to stop making things harder on people, like Michael said in Black or White.

Every single person in the world is a by-product of the society we live in. In this case, Iggy is just a by-product of society and she is not the problem in the hip-hop/culture race debate, she’s just the scapegoat. The real problem is when hip-hop went from being about music to being a money-making business.