* If you think you could rank the games better, think i’ve missed iconic games, please comment below and create the discussion. Enjoy.

Though Sega Genesis was the first system I ever played in my life, the Nintendo 64 was the true first system I played. Don’t get me wrong, playing Aladdin and Batman Forever on Sega was fun and amazing but no system when I was younger was better and more iconic than the N64. As well, many people who know me know that i have a heart condition but it hasn’t been life threatening since I was baby. I’m 100% healthy but saying my heart condition is important because  it has a connection with the Nintendo 64. Being at Sick Kids from when i was baby until I was 18, the Nintendo 64 was a system I played there every time I visited. Even in 2014, the system is still there in the kids place which is hilarious really. System is so old but it is timeless; however, the graphics aren’t but kids don’t care about that. When I had to stay at Sick Kids for a month back in the day, this was the only thing keeping me entertained. Again, I want to stress i’m completely healthy. This system was apart of my life and these are my top ten favourite games.

This game was so much fun. For my North York people in Toronto, if you remember the theatre at the Victoria Park that currently has Toys R Us and No Frills. I watched all three Pokemon movies in that theatre and that is still one of my favourite things I had the privilege of doing in my childhood. Playing this game, I was Ash out here. Picking all the Pokemon and battling it out, it was too fun. Would love for the Wii U to bring this game back to fruition and the rumour of it coming back is all over blogs and gamer websites, so maybe it might happen. This game hits the ten spot because this game was out of this world fun and Pokemon is still one of the best shows I watched back in the day. The soundtrack was amazing in this game too.

Even before you press start, you are already bumping and singing the theme song in this game. This game wasn’t your average racing game. The game was from an arcade game of the same name but made it’s way onto the N64 system. You could drive almost anywhere in the world from Germany, England, Egypt, Hawaii and Italy. You could do some crazy tricks on hills and use boost to make yourself win. Customize your car and do all sorts of crazy things. This game was crazy fun and deserves to be in the number nine spot.

This game was the game I played the most at Sick Kids. This game was so hard for me but so much fun. The basis of the game was beating your opponent by maneuvering around mini balls that were in the water. This being a jet ski racing game of course. It was pretty hard for me to win games but the competitiveness made the game extremely fun and addictive. This game holds a memorable spot for me and earns itself the number eight spot.

I don’t care what anyone say’s, WWF or now it’s called WWE was the greatest soap opera that I watched in my entire life. Honestly that’s what the show is, an entertaining scripted soap opera involving wrestlers and gimmicks. I don’t care if it was fake, it was entertaining and the attitude era was the golden era and luckily i got to watch it at that time. WWF No Mercy was an amazing wrestling game, it was really was the best wrestling game.The higher the popularity of the sport, the better the game is and wrestling was at an all time high, so all I wanted to do was play this any chance I go to and for that it gets the number seven slot. Being The Undertaker to being Triple H to being Shawn Michaels, the selection of people was outstanding.

I mean the concept is already genius for this game. You get to play with all your favourite characters and just battle it out in absolute mayhem. This game is iconic and classic. Would be higher but the quality of the other games is too great. My favourite character was Falco and every time I used his move I shouted it ; Falcon punch. Man I loved playing this game and luckily there was another version on the gamecube and the Wii and now later this year the new one will be coming out on the Wii U. The fact that you had to keep knowing down opponents and trying to get them off any crazy arena you were in was so much fun and still is so much fun on new versions of the game. The premise of the game is amazing, the characters are amazing, the arenas were amazing and the story mode was pretty easy but still really fun and that is why this game sits at number six.

The top five games were really hard to put in order except for the number one spot. That game is still everything to me. Enjoy.

If you have four people around you and you play this game all together with them, you might lose a friendship at the end of it. This game was dead serious man, the mini-games were intense and it gets frustrating when someone else has many stars and you have none which was the premise of the game. There has been many more Mario Party games after the first and deservedly so, this game was the perfect game for any party you host. The game holds almost 100 mini-games so the fun never stops. This game was a true gem and cracks the top five.

This game was the second best co-op game on N64. This game was the second best shooting game on this system hands down and the co-op storyline was amazing and the whole dialogue and graphics were impeccable. Still have not beat this game being completely serious. There is one stage that I have never gotten passed and trust me i’ve played over the years and still haven’t done it. The Multi-player mode was pretty fun but the co-op mode and the guns you can use makes this game a classic and cracks the number four spot. Some might say this game is better than the number one game on this list but I beg to differ.

The coveted top three. They all deserve to be here and this is where true nostalgia starts to kick in. Enjoy.

I mean do I even have to even explain why is game is iconic? Doesn’t this gif just say it all? This game was decades ahead of the curve. This game set the standard and if wasn’t for the fact that i’m mostly basing my decisions on the terms of fun the games gave me, it would be comfortably be number two. You walk into the castle from being outside, the graphics by the way were insane in this game, just miles ahead of anything that was going on. You enter the castle and you walk around and our amazed at the graphics. You jump into a painting and just like that the game begins. The stages were beautiful, amazing and legendary. I can still play this game if I really wanted to and would still be amazed at it and that is why it sits in the number three spot.

Where do I even begin? This game was my childhood and I know it sounds like I keep saying everything is my childhood but trust me this game was huge part of my childhood. The tracks, the items, the secret parts in many tracks that helped you especially in the rainbow row track. The battle mode and grand prix were amazing modes in the game but nothing beats the multiplayer aspect of the game. Mario Kart 8 is the most recent game and best believe I own that. Mario Kart 8 has the rainbow row stage in its game and the updated version has the iconic music and it’s so nostalgic. This game could have been number one but number one is iconic and timeless and everything to me.

Number one is iconic. Enjoy.

Personally this is my favourite bond movie, maybe because the movie reminds me of the game and vis versa. That probably sounds dumb but just follow along. This is hands down one of the greatest multiplayer games of all time. Honestly, I think Halo is the only other game that kind of pushed the gaming world in the next stage after Goldeneye came out. This game was my childhood because I remember playing this game with so many people and wanting to win so bad, so I can brag about it. This is where I started screen looking and cheating and would always get caught doing so. This game was intense and sometimes you needed to cheat to win. One of the special parts about this game is aftermath of a multiplayer stage. You get your rankings from being most professional to being most dishonourable to most coward. That was always fun to read. The graphics at the time were incredible, the story mode was crazy and the first stage when you drop from the bridge is iconic in itself.

Proximity mines in the Bunker, running around in the Caverns, Complex and Temple. This game was life to me. The soundtrack music and the guns that you can use were just insane. This first person shooter set the bar for many games to follow and is still regarded as one of the greatest games of all time and when I started thinking of this list this game was already number one. 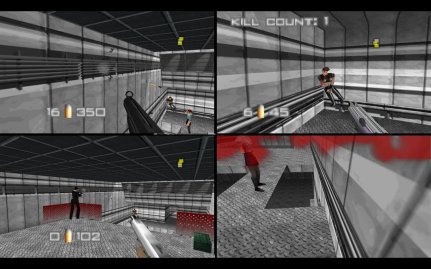 Games that just missed out

I only omitted Zelda due to how frustrating that game was, but that game is iconic and if it was based on gameplay and story that game would be top 2 in the list. Wrestlemania because No Mercy is better and the other two aren’t good enough.